I have no idea how many views my competition is getting, and while I'm tempted to find them and obsess over them too, I'm scared to give them the views! ;)
But I'll go ahead and tell you I have 89 now that are showing up! I don't even have half that many FB friends, so evidently people are sharing the link and their friends are watching too! I thought I might hit 50, to be honest. I'm so grateful to everybody who's stopped by for a minute and four seconds to show their support.
I'm going to try not to think of the hundreds of views the others in the tiebreaker are probably getting - I know my geeky webcomics + amateur movie clips + cool media experiment of the month are only going to appeal to a narrow niche anyway - but I'm really happy that I'm capable of reaching out beyond my own circle. And all this before I even get the real launch going!
Since I have to rely on other people for this part of the challenge, I'm doubling down on getting the newsletter and signup bonus ready, and everything else I need to do to live up to the promises in the video. I'm so full of ideas to make everything even better I'm having to rein in and do the tasks in front of me :)
On Sunday before 4 pm EST, I have to take a screenshot of how many views I have and send it in - so after that I should be back to normal sorts of posting stuff :) Bear with me!

I'm in what I'm pretty sure is a six-way tie for first in a social media contest and the odds are stacked against me - everyone else actually has an established business and audience! So I'm pulling out all the stops to try to get views on this video: http://youtu.be/1RdaSn1yhKU.
It's a short - one minute and four seconds, I think - movie-trailer-style mission statement for my webcomic & multimedia stories. There's exciting music, it's safe for work (well, turn down the volume if management frowns upon you watching movie trailers), and it would mean a lot to me if you'd take a look. Shares would be even better, if you're so inclined. I have until Sunday afternoon and then I have to take a screenshot to prove how many views I have.

Thank you so much!

I'm in the running for first place! The bad news, there's a freaking terrifying tiebreaker challenge and I desperately need help!

I'm supposed to make a video - and whoever gets the most views wins!

Auuuuughhhhhhh! I don't know how to do this! But I'm going to anyway. So please, if you see this can you please please please view, like, and share the video as soon as it goes live on YouTube? I hope to have something nice up by tomorrow.

I don't know what else to do. The contest ends Sunday and it's so close - there's at least six others competing for first with me and I've never done this before.

Also Joe just came back from a kinda rough experience at the dentist and I don't have time to work on this - I may be up all night.

Tada! Read up on everybody. :) I have thoughts, but no comments, sorry.

Disjointed because my head's in a game. Taking a marketing class online, there's a scavenger hunt affiliated with it, lots of social media challenges to complete, $500 cash on the line... I haven't taken first but I've been top 4 for the entire thing and it ends Sunday and I really really really wanna win.

So, house is chaos, of course it's going on during time change adjusting, and a lot of new stuff came up in volunteering. Also got a client and finished a graphic for her during the game.

Applied for a grant and won't hear anything until the 31st.

Supposed to get banners soon - one for 4 H, one for my vendor space I may or may not get....

One of the challenges was making a video - that was fun. I need to learn how to do it properly. There's an online class about it tomorrow. And I'm interviewing someone for another challenge, etc. if you want to see all the stuff I've been up to the link to my completed challenges is www.otherrealmstudio.tumblr.com

I'm sleepy and jittery and have had too much coffee. Catch you later - probably when this is over and I start making sense again. :)

Not good lately... I can't get through to check the balance with the power co. - I thought I paid the last one a little late but if it got lost on the way I need to know - , the weather is miserable, I ache all over but especially where I fell yesterday rushing Meri Lyn to a bathroom (she's fine - the "save the baby" instinct kicked in and I whomped down hard on my hip while holding her up), tore up two of my nails down to nubs, still have this miserable cold, house is trashed, need groceries, made some risky stick-my-neck-out queries and already got back a disappointment, and I can't stop yelling.
Okay, I did unleash the majority of yelling on a stupid couple of dogs - well-fed dogs with collars - that have been coming around because chickens look fun to play with. Labs. You know what a lab's instinct is with birds? Fetch. Stupid untrained oversized puppies romping around wanting to play tackle football with my chickens, just on the other side of a flimsy fence.
I'm not happy about them potentially playing tackle with my kids either.
Living in the country does not mean the entire neighborhood is a dog park.

So what am I going to do about it? (The day, not the dogs - if this turns into a regular thing with them I may have to do some target practice. I'll see what Joe can find me in terms on non-lethal rounds if it makes anyone feel better.)

I need some quiet, and then I'll pull together a list, and then I'll eliminate some things that are bugging me so I can clear a space to think - laundry, dishes, visible floor- , and make sure I'm hydrated and go ahead and take some Tylenol because there will be a headache soon, and then we're getting groceries and then we're all going back to bed.

We might not all get to go back to bed, but it's nice to look forward to.

Just got an email from the retreat I applied to.

Okay, 70 possible spots, and 270 applicants - there's 199 others out there who are also disappointed. But I need somewhere, sometime, to do delicate inking in peace, and let it dry.

I'm at a dead end with this one right now.

So, now I'm thinking about tornadoes.
Two major-for-this-part-of-the-country snowstorms and a 4.1 earthquake (followed by the much less noticeable 3.5 one a couple days later), and I walk outside to check for eggs (found two! Good job, um, Gertrude and Agatha, I think?) and notice how strong the wind is today.

I'm not paranoid, no sir, not AT ALL.

Wow. Let's cross that off my list of stuff experienced and never do that again.

Scared Jimmy a bit. Joe and Meri Lyn were sleeping.

Idiots are overloading the 911 lines about it.

Good night - I hope I sleep. 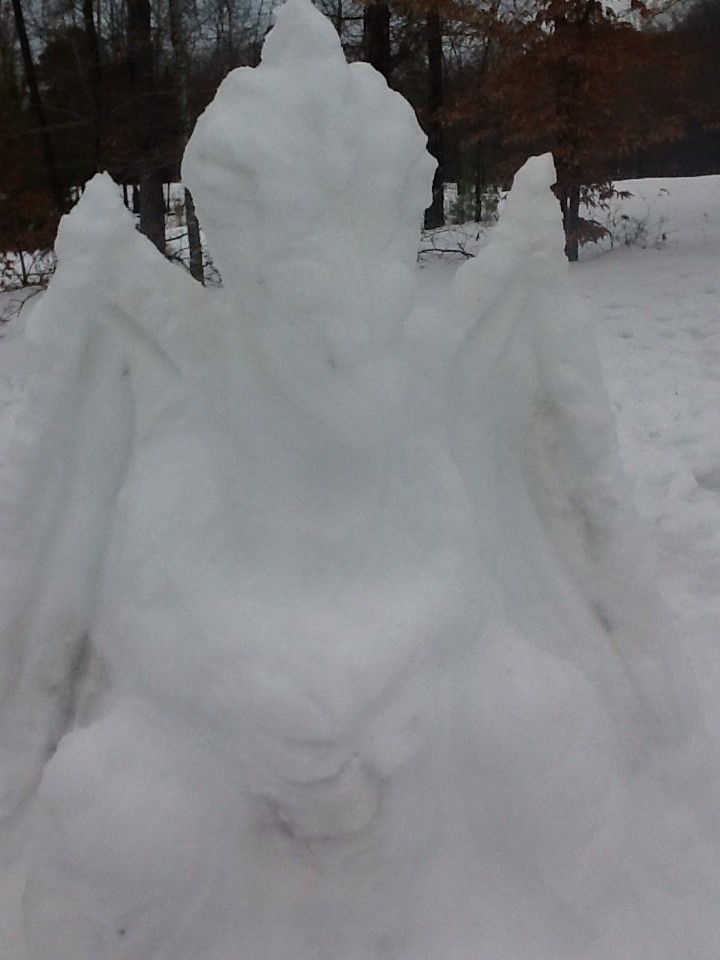 The year I was about 12, we had a good decent snowfall and all I wanted was to build a snow dragon.
Well, I couldn't. Nobody was interested in helping, and I was tired and cold and soaked and couldn't do what I wanted.
Now, we've had two days of snow, only a little ice, and it's wet enough to pack together - and my sweet children were excited to help : )
My snow dragon is as big as Jimmy and Meri Lyn took over the tail sculpting, and I'm really pleased with it :)

It's been snowing steadily since 6 am, my chickens don't particularly like it, but at least it's wetter snow than last time. That dry snow was bitter stuff. This I think will at least make a decent snowball.

I may not have seen a *lot* of snow in my lifetime! but I'm seeing enough to concern me a bit. We aren't prepared for deep snow in this part of the country. Nobody has much practice driving in it, next to nobody has snow tires or the sort of vehicles that get through snow, and road maintenance crews don't really have the plows, salt, etc. that's common up north. We're still grateful that the road's paved now. So, yeah, six inches in the forecast isn't much when it happens every winter, but it's quite a bit when your region isn't equipped to handle it.

I expect ice later and then a power outage - because every ice storm, the power co. misses a dead branch in their pre-storm cleanup or somebody skids off the road into a power pole. So, I've boiled some eggs and I'm making pancakes and I may just go ahead and fix dinner. If the power's on at dinner time, great, we'll heat it up, if not, great, we'll eat it cold.

We are just about out of groceries since I didn't want to go shopping right before leaving town. Now we're back from two nights in the Tennessee mountains, made a quick trip to Target, and bought odds and ends. Not bread. We hardly eat bread, and we still have milk, so we avoided that cliche. I can cook spaghetti, stroganoff helper (Joe's pick - he loves that stuff), soft tacos, soup, and various breakfast stuff. We'll survive.

We didn't see any riots, but we could identify the least popular kind of bread (100% whole wheat reduced calorie) because that was all that was on the bread aisle.

In other news, there is a mouse in the garage. I saw it, and it was just a tiny mouse - but later I heard it rustling around and it sounded huge, so maybe there's another critter in there I'd rather not know about. Eek.

In a minute I need to plug in the iPad again. I downloaded a book to review and I can do that if power goes out. I spent a ridiculous amount of time on NetGalley setting up an account and all, but it will be worth it because I'll be doing reviews on my website regularly - I think. If not, I should be able to make a little money subbing to review sites.

I wrote down all my projects and noticed that while I was excited to get started on my new Stories Ministry assignments, the book review, and my marketing class, I froze up and started stressing when I typed "Queries." Considering that writing articles is a big part of this year's plan to stay afloat and get ahead (earning money to finance adoption fees), this is not a good sign.

But! I have a plan. I'm going to do all the prep work for an article - choose a topic, find some experts, write up interesting stuff for the sidebar, maybe even take photos - and have it all ready to write. And that's as far as I'm going to think about it until after all that's done. (Shh, don't tell me that I'll write the query for it then).

And I'll just do a stack of article prep files "for fun." It's my new hobby. Noooo pressure whatsoever. ;)

Still snowing out - four hours and still just as steady.